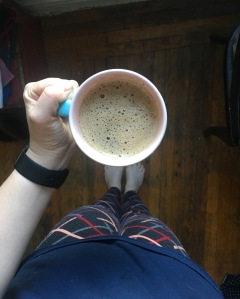 Coffee: the most used drug in our society.

Yea, that’s right. Drug. It is. Caffeine alters your state of mind for better or worse.

Caffeine pumps adrenaline into the body and gets the adrenal glands working in a way they’re not supposed to. The adrenals are responsible for regulating the stress response through the synthesis of cortisol and adrenaline. Cortisol is a hormone that affects everything from blood sugar to metabolism. Adrenaline equals energy. Caffeine is a stressor to the adrenal glands so instead of releasing adrenaline, it activates cortisol; the fight or flight response. Now, the adrenals are just trying to keep everything “normal”but caffeine throws a wrench in things.

Let’s set one thing straight: I drink coffee. I drink coffee almost every day. I love my French Press. I love sipping a warm cup o’ joe while I wake up or while I catch up with an old friend. It’s sacred time for me.

I drink only one cup a day (in a ginormous mug), in the morning, and then I switch to herbal tea. I am not dependent on coffee. I have gotten my intake down this low with lots of withdrawal and hard work. I try to only drink coffee when I want it. I could want it for comforting reason, because my boyfriend already made some, or because maybe I actually think I need it. But if I’ve made it through the first four hours of my day without a cup, I don’t drink any that day. I don’t need it.

The average American drinks 3.5 cups of coffee/day and a lot of the time it’s not just the coffee. It’s the coffee, plus cream, plus sugar, plus whipped cream… that’s when it gets out of hand. That’s when coffee becomes unhealthy: when it’s too much, too often, and too many calories. You’re dependent on coffee. You NEED it to get through your day. Not good.

The health benefits for coffee are controversial.

Everyone is different. You should look at your relationship with coffee and think about if it is a good one. If you get tired after drinking coffee, have insomnia, or can’t eliminate in the morning without it, you probably need to reevaluate.

That’s what I did. I didn’t go cold turkey. I’m not crazy. I started with not drinking it first thing in the morning and drinking a big glass of warm water with lemon instead. This helps stimulate liver function, boosts metabolism, and curbs cravings. After an hour, or more, I would have my coffee. If I felt like I needed more later on in the day I would get myself green tea instead.

Eventually I stopped feeling like I NEEDED coffee every morning and would forget about it. I’ve noticed that I am more alert and don’t need it much at all anymore. Sometimes I’ll make a full french press and I’ll drink a few sips and be good. Which is can be wasteful but, not to worry, I just pop the french press in the fridge and have cold brew the next morning if I want it! Or my boyfriend just drinks it. That’s more likely.

Moral of the story:

Coffee is worth it if you don’t turn into a crazy person if you don’t have it. If you’re grumpy and not yourself unless you have a cup of coffee, probably not worth it. Experiment! Our bodies are awesome science experiments!

Everyone is different. I’m not going to tell you all that you shouldn’t drink it or else you’ll die!!! That’s just not realistic. I truly believe that everything can be enjoyed in moderation.

Next time I’ll tell you about some fun upgraded coffee concoctions I’ve been trying lately!

Previously On : Health in Bloom