It’s Day 6 and I am happy to report that I am feeling much better today.

As I was walking to the train this morning I was thinking about how awful it can be to feel sick and commute in New York and how happy I was that I didn’t have to do that today. It’s one of my least favorite things. Or the fact that in order to do a simple task like go to the store, you have to walk, most likely a half mile or mile round-trip. You can’t just plop yourself in a car and drive to the store and mosey on in… Obviously if you’re that ill you can have things delivered, but what about if you’re trying to be financially responsible? Yea, the things you mull over when you live in NYC are not akin to many other places in the world…

As I walked down the steps to the subway this morning feeling the best I’ve felt in three days, I felt so thankful. Thankful that I live in a place that allows me to be active even when I don’t realize it and how that ultimately makes me a healthier, happier human being.

New York, I love you because… 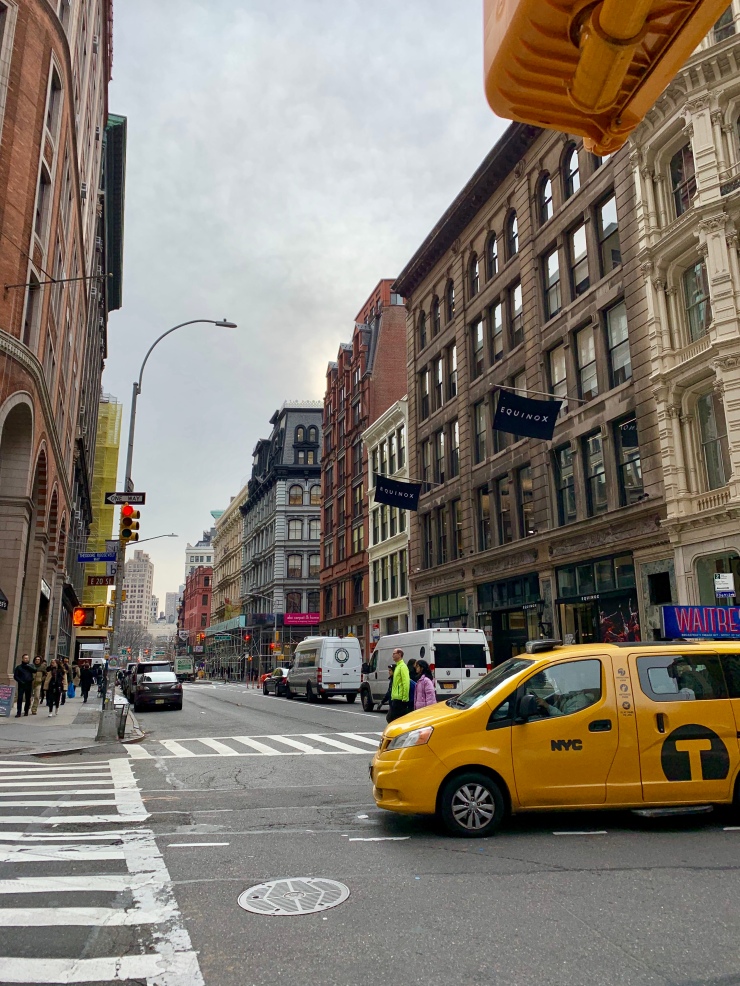 you allow me to walk everywhere, clocking 5+ miles/day without trying

you have a plethora of choices that often overwhelm me so much that I hate you, but if I am without all of these choices, I miss them

of your raw humanity- you cannot be blind to humanity’s struggles in NYC- homelessness, poverty, mental illness, entitlement, homophobia, racism, sexism, all of it, it’s everywhere and somedays it’s too much, but I’d rather not be ignorant

your resilience- whether it’s train delays, traffic, long lines to buy groceries, natural disasters, or a terrorist attack, collectively, New York bounces back with a warmness  that I simply cannot explain

you smell- of trash, urine, car fumes, and defecation (human or animal) but also of freshly baked bread, pizza, cherry blossoms, and the salty scent of the Hudson River flowing out of the Atlantic Ocean

your food- you have everything I could ever want, some of it “meh”, but most of it the best of the best from all around the world

your inspiration- from the stages of Broadway, to the beautiful sunrises and sunsets, to the iconic landmarks, the views of the urban jungle, fashion, museums, rich history, and more

your nature sanctuaries, parks, and conservatories that mean so much more than they do anywhere else- my favorites include Riverside Park, Fort Tryon/The Cloisters, Inwood Hill Park, Madison Square Park, and, of course, Central Park

the plethora of Trader Joe’s and Whole Foods, enough said

your Sports teams- even if they all suck right now, you’re loyal beyond belief and you still have bars scattered across the city dedicated to other city’s teams from around the country- now that is respect

your sense of adventure- nothing says adventure like transferring at the 42nd street subway station during rush hour from the A train to the NQRW train while carrying a cup of coffee and listening to a podcast while carrying a gym bag on one shoulder and a purse on another, dodging in and out of people like you’re playing a video game, to then tetris yourself onto a subway car, practice your balance because there’s isn’t a nearby pole to hold onto, squeeze your way out to dodge some more slow pokes, to run up the stairs and onto the streets where there are bikes, cars, mopeds, skateboards, and more people to be aware of, all before you walk into your workplace to start your day…

you’re easy to hate, but you always find a way to remind me why I love you

Previously On : Health in Bloom